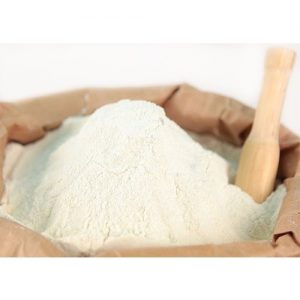 Psyllium adds fibre and improves the bulk of food. It is used as a thickener in ice cream and desserts. Psyllium is also used in fresh fruit and flavoured drinks for a better mouth feel. It also has many health benefits and is used in a number of pharmaceutical products. Psyllium is a natural product popular in gluten free baking.

Psyllium husk comes from a variety of plants belonging to the Plantago genus. These plants are cultivated mainly in India, as well as Europe and a small amount in the United States. The Psyllium Husk is produced by separating it from the seed by application of mechanical pressure to crack the coat, followed by boiling water and mechanical gravity separation to remove the husk. In the case of powder, the husk is then further processed by milling and sifting to appropriate mesh size.
Psyllium Husk is typically associated with its use as a laxative to relieve constipation and maintaining regularity. However, it has also been used in the treatment of dysentery, hoarseness, as a demulcent, and its mucilage being applied to sore eyes, throats, burns and bruises. Though less common, Psyllium has seen some uses in other industries such as in food to increase dietary fiber content and in cosmetics for its fast dry time and gelatinous qualities.