Traditional Chinese medicine has produced a “magic medicine” against the COVID-19. What is the effect of Cepharanthine?

Home » BLOG » Traditional Chinese medicine has produced a “magic medicine” against the COVID-19. What is the effect of Cepharanthine?
Previous Next

Traditional Chinese medicine has produced a “magic medicine” against the COVID-19. What is the effect of Cepharanthine?

According to recent news, on May 10, a new medicine for the treatment of COVID-19 discovered by Chinese scientists was authorized by the national invention patent. The patent specification shows that 10uM (micromol/L) of Cepharanthine inhibits the replication of COVID-19 by 15,393 times.

Cepharanthine is a potential drug for the treatment of new coronary pneumonia discovered by domestic researchers in May 2020, and a team has verified its efficacy in animal experiments in 2021.

It is an alkaloid from the Stephania Japonica, which is a member of the isoquinoline and bisbenzyl isoquinoline alkaloids. At present, it is mainly to stimulate the recovery of immune function of the lymphatic system after administration of antitumor drugs or X-ray irradiation.

In Japan, Cepharanthine is one of the drugs approved for the treatment of alopecia areata because it has been found to have anti-inflammatory, antioxidant, and immunomodulatory effects.

Since 2020, its therapeutic effect on the new COVID-19 virus has attracted attention.

What is the effect of Cepharanthine in the treatment of COVID-19?

I summarize the available data here.

Beijing University of Chemical Technology published research related to Cepharanthine in the Chinese Medical Journal in May 2020.

The researchers tested the pangolin coronavirus GX_P2V, which is similar to the new crown, and one of the results was mentioned in the news: the level of viral RNA in infected cells treated with 10 μmol/L CEP was higher than that in infected cells without drug treatment. 15,393 times lower. In this experiment, the EC50 value of CEP for GX_P2V was 0.98 μM. 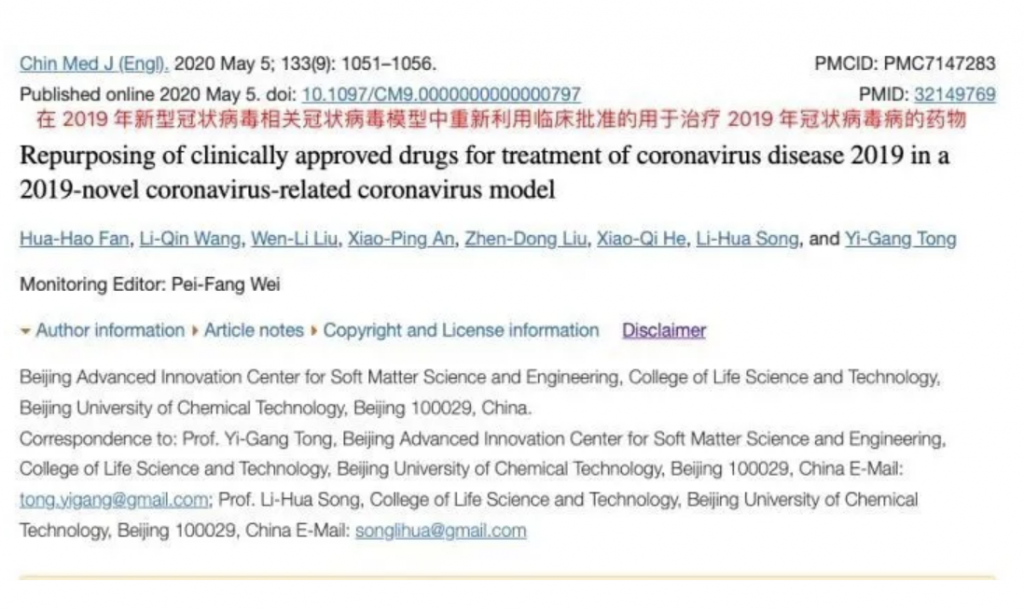 In January 2021, the Beijing University of Chemical Technology published a paper in the journal “Brief Bioinform” to explore the possible mechanism of Cepharanthine (CEP) in the treatment of new crowns: CEP and heat shock response, endoplasmic reticulum stress/unfolded The protein response is related to autophagy and other viral interference genes and pathways and has a strong inhibitory effect. 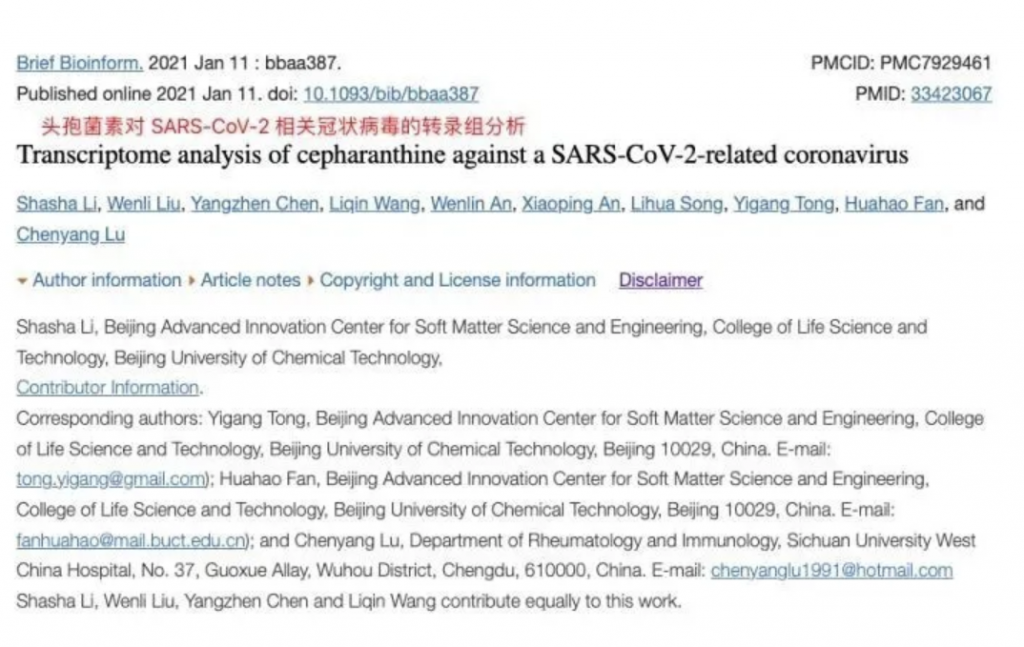 In 2021, in a study jointly conducted by Tsinghua University and Union Medical College, researchers found that Cepharanthine inhibited the infection of the original strain of the new coronavirus with an IC50 value of 1.67 µM and a CC50 value of 30.92 µM.

They also conducted animal experiments on the infection of the original strain. One day before infection, the mice were given intranasal injection at 10 mg/kg/d. On the fifth day, the viral load of the mice was significantly lower than that of the control group. And the lung inflammation in the treated mice was also significantly reduced.

In April 2022, when the Wuhan Virus Institute was screening other medicine, they also measured the EC50 value of Cepharanthine against the new coronavirus at 2.24 μM. 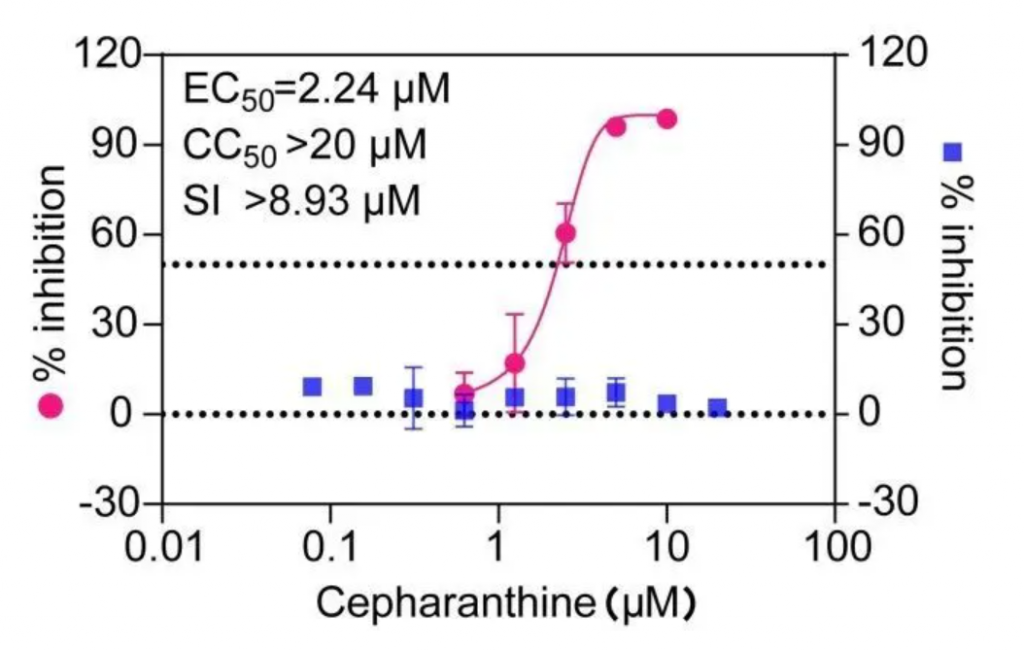 Japan also conducted an in vitro experiment to verify the effect of the combined application of Cepharanthine and nelfinavir:

Both medicines reduced viral RNA released by infected cells to a maximum of less than 0.01% in one day and were more active than the then-candidate therapeutic drugs redeliver, lopinavir, chloroquine, and favipiravir. In addition, the combination of nelfinavir and Cepharanthine eliminated the virus from infected cells to below the detection limit within a day.

Their experiments show that the mechanism of action of Cepharanthine is to inhibit the binding of new coronavirus to cells, but this is a simulated intravenous administration. 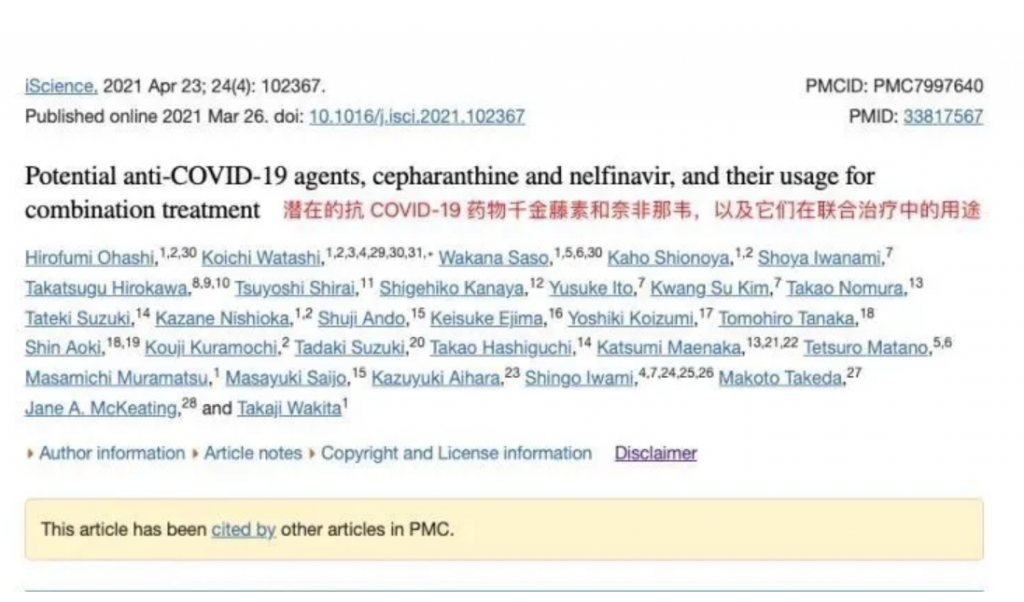 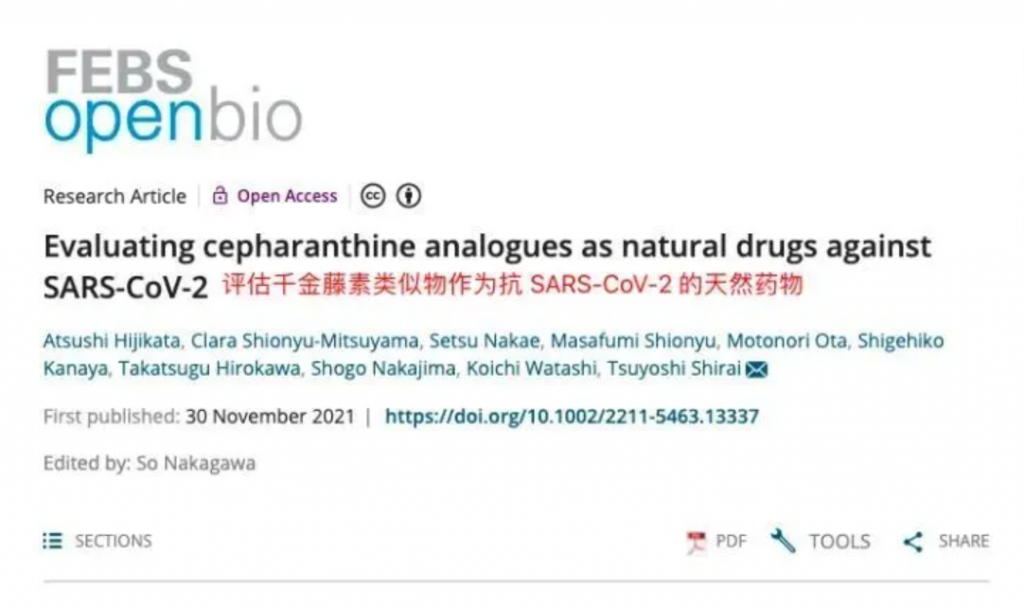 But they (the Japanese team mentioned above) also proposed:

Phospholipidosis Considering the putative mechanism of action of CEP and TET, i.e. inhibition of endosomal lipid/steroid transporters, the same adverse effects would be unavoidable, ie phospholipidosis, and now the primary consideration is the ammonium cation group in the molecule. Therefore, when designing a drug molecule, replacing the ammonium cation group should be considered to make a low-toxicity derivative.

The Canadian company PharmaDrug has produced an improved version of the Cepharanthine PD-001, which has shown good bioavailability in animal experiments (that is, oral administration is better than traditional Cepharanthine absorption).

There are currently ongoing trials of PD-001 in three indications: esophageal cancer, prostate cancer, and COVID-19. Its U.S. Patent No.: 10,576,077, entitled “Pharmaceutical Salt forms of Cepharanthine and Tetrandrine”. The company plans to develop oral drugs for mild to moderate COVID-19.

In November 2021, the company announced that it had completed a Pre-IND meeting with the FDA and is progressing through clinical trials. 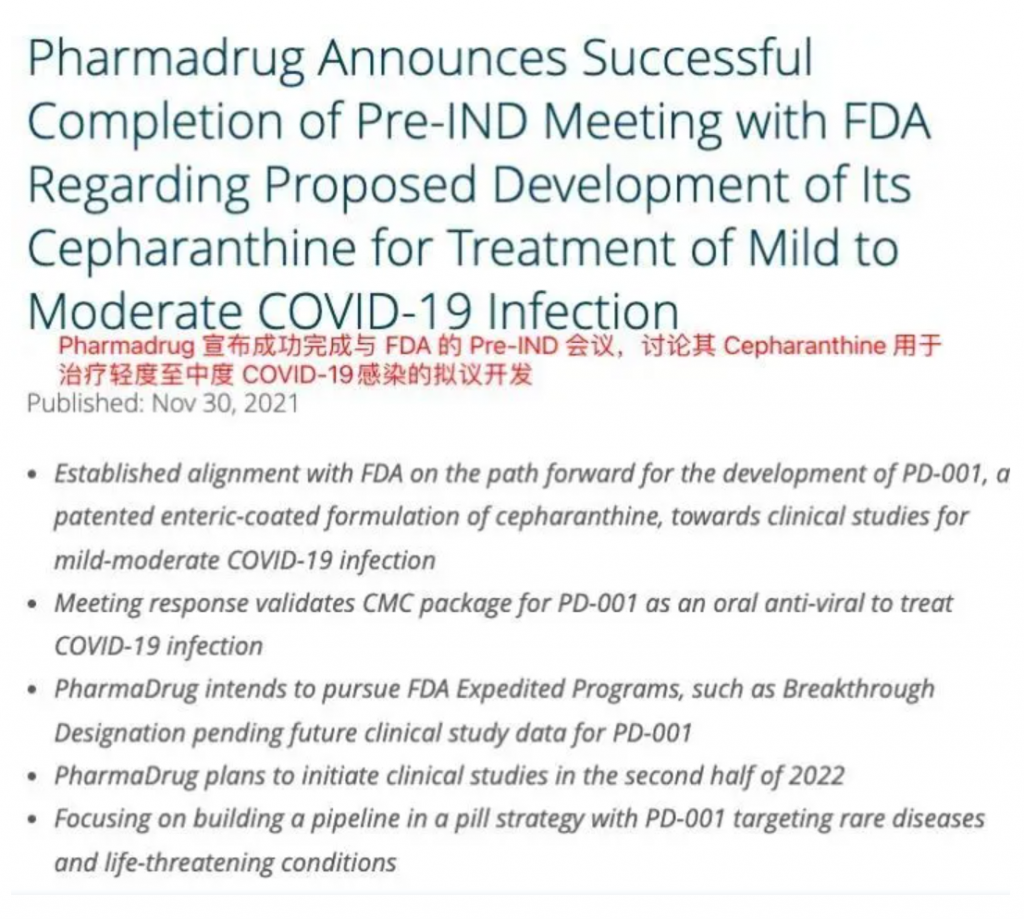 The above is the Chinese, Japanese, and Canadian research progress of Cepharanthine. It can be seen that there are already relevant data on animal experiments in China, but there is no relevant progress in clinical trials. Canadian companies have taken the lead in this regard. The drug molecule itself has certain “defects” and may need to be redesigned.

Finally, it is hoped that more suitable anti-new crown drugs can be developed as soon as possible.